What Classical Music Means To Me

I have memories of going to local electronics stores and seeing clips of an orchestra playing on the latest big screen TVs, in between other HD footage of a chef making food, and meerkats in the wild. When we watched TV at home, there would also be ads with orchestra clips in them. These memories stayed at the back of my mind, and I would come to realise that orchestras are used in commercials because they represent a high standard of quality, or so I think. To produce a single person who can play an instrument to a level of mastery takes years of dedication, anguish, and some divine intervention. A great orchestra is made up of 60, 80, 100 musicians who have all reached that nigh impossible standard. It is akin to any technological marvel, whether it is the 1800s or the 2020s.

Classical music to me is something that is divine. Because it requires so much discipline to do well, humans have to transcend being human. To me it represents the highest form of living, and one of the greatest things that humans can create.

30s/F/Malaysia. Rini is my given name. I'm an amateur classical musician and I like playing viola in chamber ensembles. To be frank though, there's nothing extraordinary about my musical abilities. My husband, Ahmad Aliff, is the real deal. From 2014 until Covid lockdowns, the two of us ran a self-funded independent orchestra. We may not be able to achieve our musical vision in our lifetimes, but there is always a place for music in our lives.

I'm so happy that Neocities provides a space for the personal web to exist again, and glad to find others who created websites as a form of rebellion against social media and the commercialised web.

Live As Much As Possible

While recordings are a remarkable tool for preservation, classical music is meant to be heard live, preferably in a specialised venue for acoustic instruments. The sonority and reverberation from the collective instruments in that space is what pierces the heart and soul to give a lasting impression.

Acquaintances, friends, and family who have raved about being impressed by classical music have done so because they've heard a live orchestra perform in a grand hall. Even the best engineered recordings listened through the best custom hi-fi system cannot capture the real experience. That said, not everyone can always watch a live performance, so recordings are better than nothing. As with any music, it requires repeated listening to get a sense of familiarity so that enjoyment can be derived.

Below is a recording that I really like. The bass has been tastefully exaggerated and was delightfully scary the first time I listened to it through my earphones, especially at about 0:27, 1:45, and 2:55.

The following poster designs were made entirely using Apple Pages (not recommended). We also designed our own tickets for the earlier concerts, and programme books for all the concerts. It was mostly fun except when the fourth concert had to be rushed so the design was undeveloped, when I had to spend hours on folding paper that I'd rather spend on practising or sleeping, or when borderless designs were printed with borders. 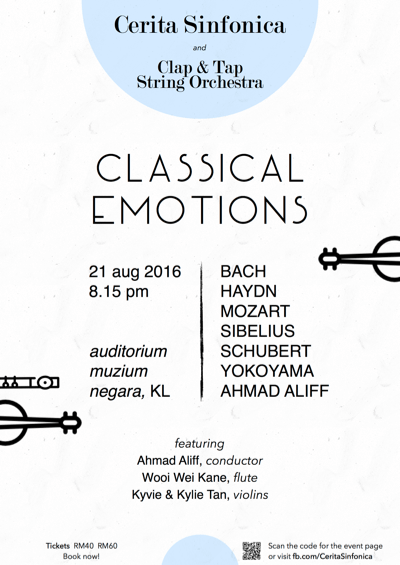 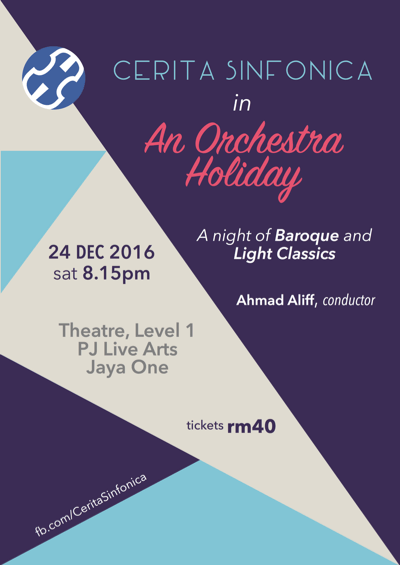 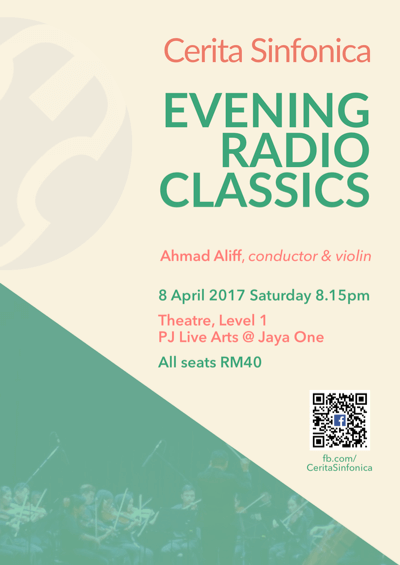 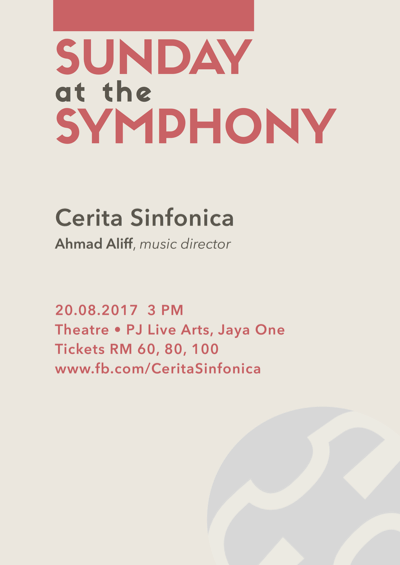 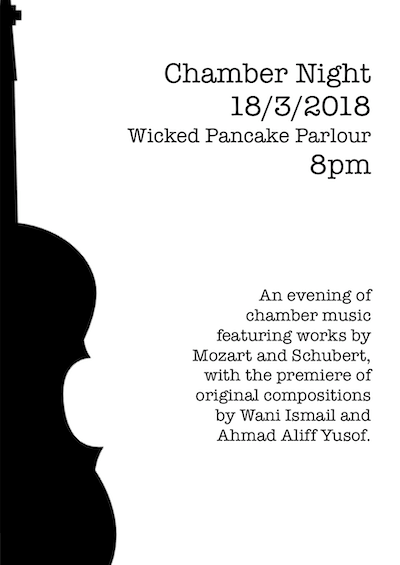 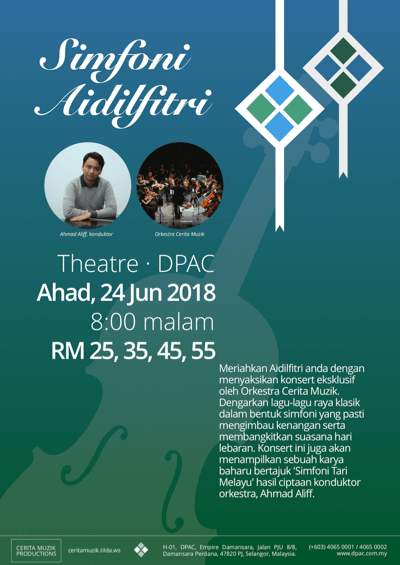 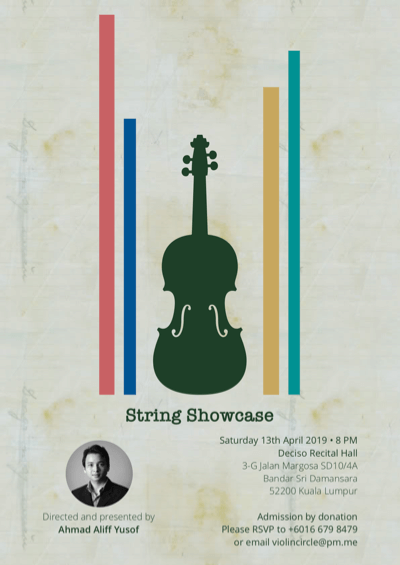 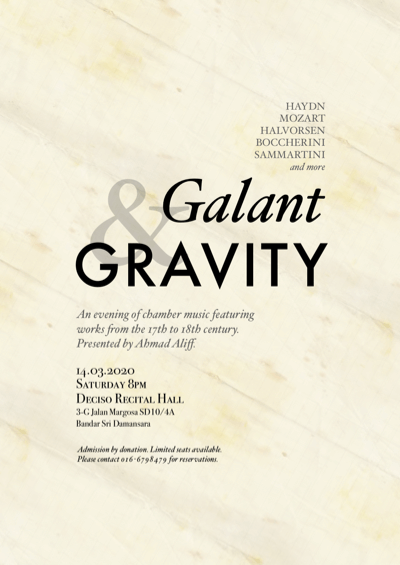 What's So Special About Ahmad Aliff?

Ahmad Aliff is a musician who wears many hats. Given the chance, he could create so much good from exploiting his full potential. As someone who has worked with and respected him since long before we got together, my life's wish is for him to be recognised and appreciated for what he does, on top of being properly compensated for his expertise. He has already accomplished miracles before the age of 30, but the reality is if you're not famous, you don't get respect.

To what good to have the talent, when one must pass one's life at teaching the infants?
-from The Enchanted Castle by E. Nesbit 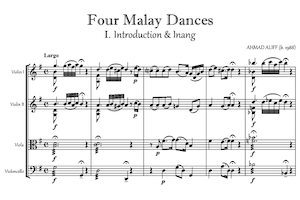 Composed Four Malay Dances and became the first Malaysian to publish an original work on IMSLP. It is freely accessible to all who know the Western music language, and will hopefully outlive us. On my bucket list is a proper performance and recording done with professional musicians. Meanwhile, our amateur premiere is available on YouTube. 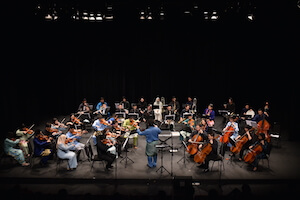 Formed and directed a volunteer orchestra under the banner of Cerita Muzik. Comprised of music teachers, students, hobbyists, and occasionally guest musicians, the orchestra put out six concerts during its run. The project is on hold, but it did achieve its goal to provide a place for young musicians to play in an orchestra setting. 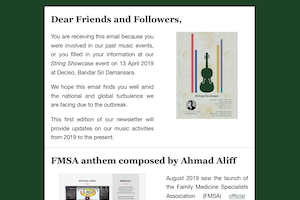 Collected email addresses on paper with the intention to send out periodic newsletters, but as it turns out, it is suspicious for email addresses to be typed in manually to the system so the plan was a bust.

Listen to Warisanku on SoundCloud

Commissioned to compose two Malay pop style songs, showcasing Aliff's literary skills as a lyricist and exceeding his own expectations as an unplanned songwriter. The second song, Warisanku, was launched in December 2021. 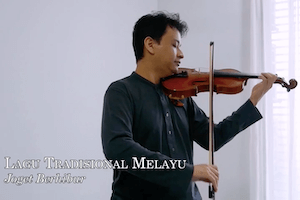 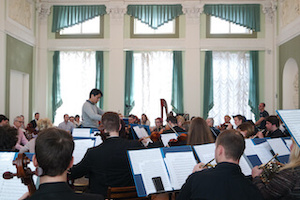 Attended a 1-week symphonic conducting master course in Moscow in 2017. An invaluable experience with an esteemed conductor. At the end of the course, all participants presented their skills in concert, allowing them to perform with the Russian Ministry of Defence Orchestra and a couple of opera soloists.